Are you wondering what a burr is? Do you want to learn how to spot or feel it?

A burr is a common term you will often hear when it comes to sharpening knives. A burr formation is a common thing when sharpening kitchen knives. If you want to get to know it better, this article will surely be of help.

I know that many are still unsure what a burr or wire edge is. So, we will explore it to understand everything about it including how to spot it and why burr removal is essential. So, without further ado, let’s get started!

What Is A Burr On A Knife When Sharpening?

I often hear from people who are new to knife sharpening these questions, “What is the burr on a knife?” or “What is a burr knives?”

Let’s start by describing what a burr is. A burr is just a bit of metal along the knife edge or the tip of the knife. It’s a strip of steel or metal material that either stands on one side or the other. It’s the very tip of the cutting edge of the knife.

You can also identify it as the raised edge or small pieces of material that remain attached to a workpiece after a modification process like when sharpening knives. Some referred to it as a wire edge because the burr appears like a fine wire on the edge of a freshly sharpened tool like a knife. It is an indicator that you have not left a microscopically flat surface at the edge (a bald spot) of the knife.

It may not be visible to the human eye, but when you zoom in on a sharpened knife edge, you will notice a plastic-like deformation of a metal at the apex of the cutting edge. It is like a small fold of metal on the other side of the edge that has been grinded.

You can check out this video to identify a burr. This video is also helpful 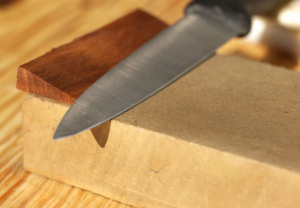 When sharpening knives, one would often hear experts say “feel the burr.” However, those who are beginners who do not even know what a burr is would surely find the statement confusing.

Several Reddit users shared their experience when it comes to feeling the burr. According to one user named fiskedyret, the burr is a tiny sliver of steel that the stone could abrade before it bent. To check for a burr is to feel for that fold over steel.

One can do it by running a finger or nail across the edge in an edge trailing fashion. One can usually feel the burr because it will catch on the nail. And the burr can be found opposite to the side that was last sharpened.

Another netizen DonNguyenKnives shared a visual of a burr cross-section under the microscope. You can see it here. As mentioned above, it’s like a plastic deformation and it’s a small fold of metal that is formed on the other side of the blade that is being sharpened.

Another said that a burr is difficult to describe but it can be checked by simply running a couple of fingertips or your thumb from the spine across the blade. It feels like a small ridge at the edge. When you do the same thing on the other side, you will feel no ridge.

You can also feel the burr using a Q-tip. It will stick on the knife and in that way, you can see the burr.

The entire length of the blade of the knife has to be sharpened to achieve a consistent ridge. Then it has to be flipped and the process has to be repeated to sharpen the whole knife.

What Does Burr Mean When Sharpening A Knife?

When sharpening a knife, one can expect burr formation. The burr is the strip of steel or metal material that stands on the opposite side of the knife that is being sharpened. It can be felt from the spine through the cutting edge.

You will sense the presence of the burr because there is a difference in texture and height. Or you can sense an elevation of the cutting edge.

The presence of a burr when sharpening is an indicator that one has to stop sharpening on one side of the bevel all the way to the edge and switch to the other side. If a burr is not formed during the sharpening, then the knife edge is not yet fully sharpened.

During sharpening, the burr has to be removed and that is part of the knife sharpening process. Skipping the burr removal process will leave the raised metal and it could create unwanted resistance when cutting. It will also prevent imparting a smooth incision that will impact the texture of the food you are handling.

More importantly, the burr has to be removed to expose the apex of the blade for maximum sharpness. Otherwise, your knife won’t reach its full potential.

How Do You Get Rid Of A Burr On A Knife? 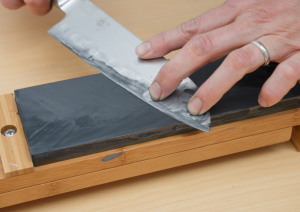 Burr removal is an important process in knife sharpening to ensure that the knife’s blade can achieve its maximum potential or sharpest point. There are many ways to remove a burr, but in this section, we will share with you the easiest approach from Sharp Pebble.

1. To remove the burr, flip the knife to the opposite side (the other side that is yet to be sharpened) and sharpen it using a knife sharpener ( sharpening stone or grit stone) with swiping motion.

2. However, apply less pressure than what was previously used when sharpening (which resulted in the formation of the burr).

3. Note that keeping a high pressure could end up creating another burr on the opposite side instead of removing it. Thus, the pressure used should be enough to significantly reduce the burr and remove it, not form another one.

For micro-burr removal, the knife should be swiped on a leather strop on each side to ensure that there is no burr left on the knife. If leather strop is not available, a stack of newspapers about a couple of inches high will make a cheaper alternative. It is equally effective as the leather strop and a lot cheaper.

4. Run your finger on the side of the blade to feel the burr. If it feels smooth on both sides, then you have successfully removed the burr.

Understanding burrs, how to form them and remove them are essential parts of knife sharpening. The burr has to be removed for a purpose — to ensure that the knife will be at its sharpest. Otherwise, the knife won’t be able to achieve its full potential.

One can easily get rid of the burr by sharpening the side with the burr with less pressure. In this way, the burr will be removed without forming a new one on the opposite side. When your tools are free of burr, rest assured that they have the sharpest blade possible.

For those who need mobile knife sharpening services, you can check out this page to book an appointment. Go Sharpening offers fast, reliable and professional service!